Patricia Lynne Duffy, is the Curator of the LiteraRY ART component page. 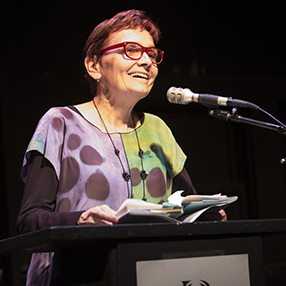 Patricia Lynne Duffy is so pleased to join Journey through the Senses as a Literary Curator. She brings with her an appreciation of the beauty of literature and its power as both an agent and reflector of social change.

Duffy is the author of Blue Cats and Chartreuse Kittens: how synesthetes color their worlds, the first book by a synesthete about synesthesia and called a “classic” in the field of synesthesia research (Blue Cats is soon to have an audiobook version with updates). Duffy is also author of the chapter, “Synesthesia and Literature” in The Oxford Handbook of Synesthesia. Her various publications include an article, “Synesthesia and Fiction”, which she co-authored with renowned neuroscientist Julia Simner.

Duffy is a co-founder of the American Synesthesia Association.

She has given a number of presentations on synesthesia and literature, (with an emphasis on her four categories of literary depiction) at several universities and institutes including Princeton University, the University of California at San Diego, Beyond Baroque Literary Arts Center in Los Angeles, McMaster University in Hamilton, Ontario, Canada, the University of Hannover in Germany, the University of Stockholm in Sweden, and Artecitta in Spain.

Duffy has been interviewed about her synesthesia and research by diverse media including Psychology Today, the New York Times, the San Francisco Chronicle, Smithsonian Magazine, and the Discovery Channel, Canada.

She is the founder and organizer of the Authors-for-Literacy reading series at the United Nations Headquarters in New York, where she has long worked in the Language and Communications section.

Neuro-diversity in Literature; depicting the Neuro-Atypical

There has long been a trend in modern fiction of authors bringing once socially marginalized characters to the center of the story, where their voices become louder. In recent decades, literary works spotlighting neuro-diverse, differently-abled characters have multiplied. For the past two decades, author Patricia Lynne Duffy has been bringing these works to public attention through her writing and conference presentations.

Here are a few examples of literary works spotlighting the neuro-atypical—and thus marking a shift in society’s consideration of neurodiversity:

– Saudade, by Katherine Vaz, about a deaf woman who grasps language in terms of color;

– Bitter in the Mouth by Monique Truong, about a word-taste synesthete—who reflects on having a minority perception and also being a member of a racial minority;

– The Color of Bea Larkham’s Murder by Sarah J. Harris, about a teen-age boy with both autism and synesthesia, whose unusual perceptions lead him to solve a murder mystery.

– The Valley of Astonishment, a theater piece created by legendary director Peter Brook and creative partner Marie Helene Estienne. The play, which has been performed at theaters around the world, was inspired by real-life figure Solomon Shereshefsky who had multiple forms of synesthesia—and who performed on the stage as a “memory artist”

Such works stand alongside more widely known contemporary classics as The Curious Case of the Dog in the Nighttime by Mark Haddon,  Born on a Blue Day, a real-life memoir by Daniel Tammet, who presents his life and amazing talents through the lens of his Asperger’s and synesthesia, and of course ground breaking words such as The Man Who Mistook His Wife for a Hat and An Anthropologist On Mars by Oliver Sacks

Patricia looks forward to bringing more literary works spotlighting the neural atypical to public attention and sharing reflections on these.

Some highlighted events with a spotlight on the neuro atypical

Our vision for the Literary Arts component of Journey Through the Senses is to explore neuro-diversity—with a spotlight on the neuro-atypical—by offering monthly suggestions of articles, lectures, exhibitions, and other events with this theme. With the current world COVID crisis, many such cultural offerings are now online, and this column will list a few to choose from each month.

Return to the Literature component Page